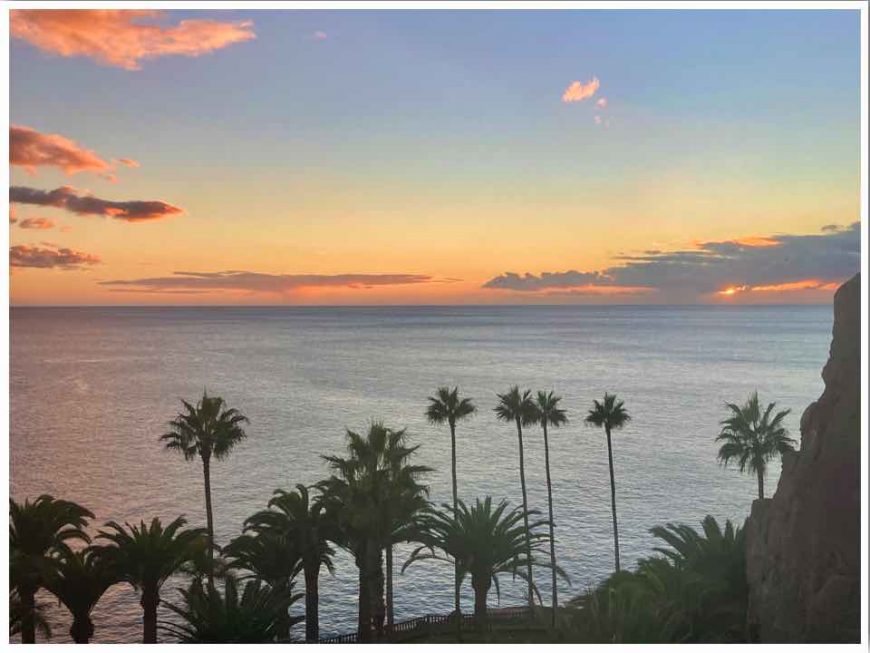 When looking for a winter getaway in Europe, there’s not a huge amount of choice if you’re after warmer temperatures. The safest bet is to head to the Spanish Canary Islands which lay just off the coast of Africa. They are technically part of Spain, so have the Euro, EU data roaming and all the same entry requirements as the mainland. I visited Gran Canaria in November. So here’s a little look into what you could expect from the weather in Gran Canaria in November and what it’s like to visit the island in winter.

Weather in Gran Canaria in November

The best weather on the island in winter is along the south coast, this is where the majority of tourist resorts are. The mountains act like a bit of a barrier, pushing the clouds to the north of the island. In November, Gran Canaria’s south coast averages day time temperatures somewhere in the low 20c’s. I experienced some days of 20c and others with highs of around 24c. I still wore suncream everyday.

Rainbow over the north of Gran Canaria in November

Night time temperatures dropped to the mid teens. This meant that early mornings and during the evenings, I often needed a hoodie.

If travelling from the UK, in comparison, Gran Canaria has approximately 2 hours of additional daylight hours, during the winter.

I stayed in the resort town of Taurito, in the south west of the island. It lays in a valley with high cliffs either side. The Taurito Princess is an east facing hotel. Even though sunrise was around 7am, the sun often didn’t rise above the cliff until around 9.30am. As a solo traveller, I used to go and sit around the pool early in the morning. Due to the valley being in the shade, I often needed to keep my hoodie on until the sun finally made an appearance over the top of the cliff. Once the sun was out, I was an OK temperature until around 4pm!

Sunrise in Taurito in November at 7.15am

The west facing resorts on the opposite side of the valley, stayed in the shadows for a lot longer. (Such as the TUI BLUE Suite Princess and the Mogan Princess). This may be something you may want to keep in mind, as it does stay a little chillier in the shaded areas.

Rainy Days in Gran Canaria on the south coast

There is a chance that some days may be cloudy (I had a couple). On average, there are around 3 rainy days during the month. I was unlucky and had all 3 during my trip! Other than my day trip where it was constant rain, on the coast it was mainly just passing showers that only lasted a short time.

The Central and Northern regions of Gran Canaria are mountainous. Gran Canaria’s highest peak is Pico de las Nieves, with an elevation of 1949m/6394ft. The mountains can be around 10c colder than the lower coastal regions. They also experience more rainy days per month, with an average of 10 during November.

I took a day trip into the mountains and it did indeed pour with rain all day long. Putting it into perspective, on the day of my trip, Taurito was sunny and 21c. While in the mountains, it was 8c and rainy. I wore 2 hoodies and shorts and not going to lie, I was cold. The majority of people were wearing jeans and full length trousers in these areas.

The day before, my guide said the top of the mountain was 0c. It may have just been a freak cold snap, as he said that Mount Teide in Tenerife already had snow on it, which was rare for that early in the season. (Mount Teide has an elevation of 12,198ft, almost double the height of Gran Canaria’s highest peak).

Can You Swim in Gran Canaria in November?

Yes, you can swim in Gran Canaria in November. It may not be as comfortable as it is during the summer months, but it’s not too bad.

The sea temperature in Gran Canaria averages around 21c in November. This isn’t bad considering the air temperature was about the same. It was a little chilly when you first got in but you soon acclimatised to it. I found that the sea in Puerto Mogan felt a little warmer and was more calmer than the sea in Taurito.

This may vary from hotel to hotel. I stayed at the Taurito Princess, they have 2 main pools, one is heated during winter, one is not. The heated pool gets heated to roughly 21c, similar to the sea. Not awful, but a little cold when you first get in, especially if it’s on a cloudy day.

The second pool was not heated and it was FREEZING. They ran the aqua gym sessions in the cold pool. It was pretty grim until you warmed up from the exercise. One day I thought I had got sunburnt on my stomach (despite wearing SPF50 suncream) but no, it turns out the freezing cold pool water had made my skin go red!

Lago Taurito on a cloudy day in November

Taurito is home to Gran Canaria’s only salt water waterpark. It is open every day during the winter. As far as I’m aware, I don’t think it is heated. The majority of the time there were only a couple of people in it at a time. If you can brave the water temperature, you’ll be able to enjoy the slides with zero lines! (It may be busier during school breaks).

This post is based on my experience visiting Gran Canaria in November. Weather can obviously be unpredictable. But for the most part you can guarantee slightly warmer weather than what the rest of the continent gets during the winter months!