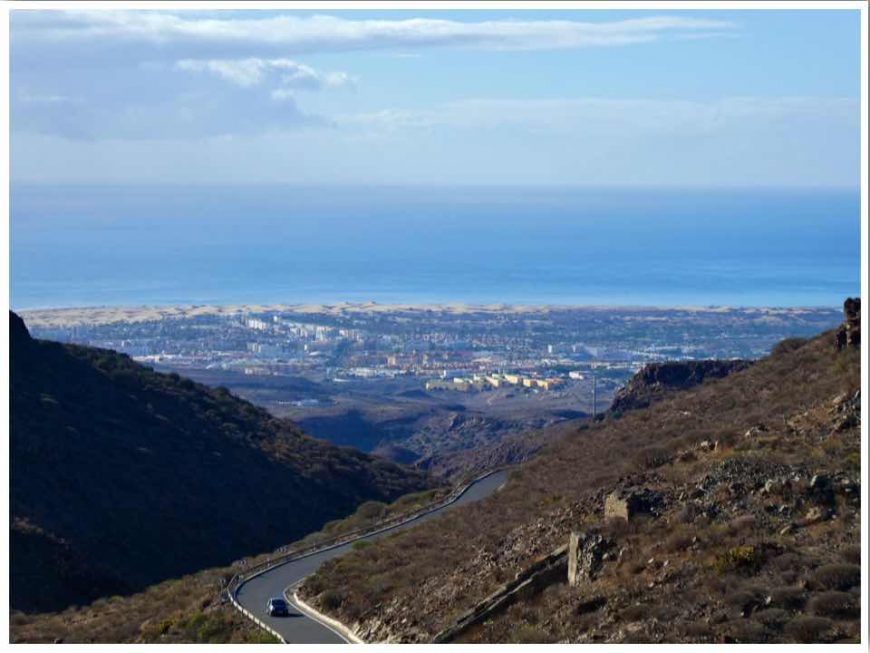 If you can pull yourself away from the beautiful beaches on the popular south coast, it’s worth taking a day trip to explore the central and northern areas of Gran Canaria! The landscape is completely different. The coastal areas of the south are generally sunny, so it’s very dry and rocky. However the mountainous regions receive over 100 days of rain a year and therefore it’s quite green! It can also be on average, 10c cooler in the mountains, so additional layers may be needed! Here’s a look at the stops on my Gran Canaria road trip that were part of a ‘highlights’ tour!

Disclosure: This post contains affiliate links. I may receive a small commission from purchases made after clicking the link, at no extra cost to you. For more information visit the Privacy and Disclosure Policy here.

The mountain roads in Gran Canaria are very twisty and narrow in places. So if you hire a car, make sure to drive carefully. Another option is to do what I did – I took an organised Gran Canaria day trip excursion through my tour operator Tui. They used mini buses to get to areas that large coaches can’t always reach. This also meant that we benefited from a local guide that knew the roads and could give information about the route.

The local bus company ‘Global’ services many of the routes on our road trip. You’ll get to enjoy the views, but may miss out on some of the roadside stops. For example route 18 from Maspalomas to Tejeda follows the first part of our trip. Alternatively the 220 from Las Palmas de Gran Canaria to Artenara will take you to the town of Teror.

The first stop on our Gran Canaria road trip was the Mirador Astronomico de la Degollada de las Yeguas. Mirador is Spanish for ‘lookout’ and there are loads all around the island. There’s a small parking area and a raised observation platform. In one direction the viewpoint looks out over Maspalomas and the famous sand dunes. Many people think the sand blew across from the Sahara Desert (the islands are on the same latitude as Morocco), however they are formed from shells and sea life from a marine shelf that dated back to the Ice Age.

In the opposite direction is the Barranco de Fataga (Valley of Fataga). This valley was carved out by a lava flow from a volcano eruption millions of years ago. It looks like Gran Canaria’s version of the Grand Canyon in the USA!

There’s so much vegetation that grows in the valley. It’s also known as the ‘Valley of the Thousand Palm Trees‘. It is said that the people in the village planted a palm tree whenever a girl/daughter was born! A succulent type plant that grows in the Fataga Valley is ‘Sweet Tabaiba’. The sap from it is used to produce chewing gum. There’s also lots of pine trees which are also used as a water source. Each tree is capable of producing 500l per year.

The valley is home to Finca Canarias Aloe Vera Fataga. ‘Eco Aloe Vera‘ is an aloe vera farm with over 15,000 plants. This is small in comparison to the amount that grows on Lanzarote! It makes for an interesting stop. It’s mostly a shop that sells a wide variety of aloe vera products. However they offer free demonstrations about how the plant is harvested and the benefits and uses of aloe vera. A plant can last up to around 30 years. Once it reaches the age of 5, the lower leaves a harvested ONLY once a year. That way it can continue to be used for years.

Aloe vera is more than just an aftersun/skin product! It is the only plant that naturally has the B12 vitamin, which helps with digestion and cleaning the inside of the body. Our demonstrator cut open one of the leaves and we were able to eat a fresh piece of the plant. It doesn’t have much flavour, just a slimy, jelly like texture. (In the past I’ve had aloe vera ice cream in Austria and aloe vera juice from a Korean restaurant! But these tasted quite fruity). We then got to sample a whole range of the skin care products.

Another viewpoint is the Mirador Las Tirajanas. This is a quick stop that looks over a village that sits in the valley. Our guide told us that this was once a volcano that collapsed and created a caldera after an eruption.

On the way to Tejeda we passed the Roque Bentayga. The giant rock formation sits at 1414 metres above sea level. It was the inspiration for the name of the Bentley Bentayga car. In this same area are the Cuevas del Rey (Caves of the Kings). These are old cave houses that were used by the Gran Canarian natives, before the Conquest of the Canary Islands by the Spanish. Regardless of the temperature outside, whether hot or cold, the inside of the cave houses remain an average temperature of approximately 20c. There are cave houses across the island and some locals still live in them. Others have been converted into guest houses or they are open as museums.

Roque Bentayga on the left of the picture

Tejeda is said to be one of the most beautiful towns in Spain. It is perched on the side of the mountain, overlooking the surrounding area which has been listed as a World Heritage Site. (Risco Caido and the Sacred Mountains of Gran Canaria Cultural Landscape – 2019). There’s a large car park a short walk away from the main street which has cafes and restaurants.

As I didn’t really know where the tour stopped, I was unable to research in advance. However I wish I had know about Heladería LaLexe, which is an ice cream parlour that serves unique local flavours!

The Plaza Mirador del Ayuntamiento is a great viewpoint. There’s a small park, an open air swimming pool and Parroquia De Ntra Sra Del Socorro church which dates back to 1912.

Unfortunately, the weather on the day of my road trip wasn’t great. We ended up skipping the highest point of the island. It was covered in cloud with zero visibility. A short drive away from Tejeda are: Roque Nublo, Morro de la Agujereada and the Pico de las Nieves. Roque Nublo is the 3rd highest altitude on Gran Canaria at a height of 1813m. It’s a large 80m tall volcanic crag (rock peak). The highest mountain is Morro de la Agujereada which is 1956m above sea level.

As mentioned above, it can be colder in the mountains, compared to the coastal areas. The day before my trip, the tour attempted to visit these points. Even though the south coast was experiencing a sunny day with temperatures of 20c, at Morro de la Agujereada is was 2c. The wind was so strong, they even struggled to open the door of the mini van!

We stopped for lunch at Tierra Guanche in the village of Las Lagunetas. The lower level of the restaurant is a gift shop that sells various local food and drink products. Our meal was served tapas style with bread, cheese and wine to start, followed by Canarian chickpea soup, potatoes, pork and amazing fried vegetables. For dessert we had vanilla ice cream served with Bienmesabe. Bienmesabe is a Canarian speciality that is made with crushed almonds, eggs, sugar and honey. It has a paste like consistency and is very tasty!

The northern town of Teror is Gran Canaria’s third largest town. A must see is the Mercadillo de Teror (The Sunday Market of Teror). The market is one of the oldest markets in the Canary Islands. It runs from 9am – 3pm in the Plaza de Sintes and the area around the Basílica de Nuestra Señora del Pino (the Basilica). It sells local handmade crafts, food and drink (no cheap mass-produced souvenirs here!).

My guide recommended a stall selling Mojitos de Guarapo. For 4 euros I had a small mojito with sugar cane juice and cuban rum. It’s really cool watching how they make the juice. They put a whole lemon in a piece of sugar cane and then run it through a giant spinning wheel. This crushes all the juice out and fills up jugs that they then mix with rum and mint leaves.

(Another market town in Gran Canaria is Puerto de Mogan, with markets on Fridays and Mondays).

It was absolutely pouring with rain so I didn’t get to explore as much of the market as I would have liked. To enjoy the architecture of Teror, head down Calle Real de la Plaza. The buildings are brightly coloured with pretty wooden balconies. You’ll also see the large Basilica of Our Lady of the Pine. It is believed that a vision of Mary was seen on top of the pine tree in the town plaza. So the town as now become popular for pilgrimages. (The current tree in the plaza is not the original).

Tourists are allowed inside, however it is important to be respectful. This includes: quiet voices, no photography and appropriate clothing. (No vest tops or crop tops, T-shirts are fine. No short shorts or skirts, aim for knee length.)

The last stop of the Gran Canaria mountain tour was to Pico de Bandama. The Bandama Natural Monument consists of a volcano cone and a caldera. You can drive up to a viewpoint on top of the Pico de Bandama, with an altitude of 569m. The caldera is said to have been created by the last volcanic eruption on Gran Canaria. It’s almost a perfect circle which is 200m deep and has a diameter of 1000m.

A man called Agustin call the bottom of the Caldera his home for 80 years! There’s a lone house and the remains of an old vineyard. There are hiking routes around the edge of the caldera and down to the floor.

The Real Club de Golf de Las Palmas is perched on the edge of the Caldera. And from the top of Pico De Bandama there are views across Las Palmas.

From Pico De Bandama, you can join up with GC-1 near Las Palmas. GC-1 is the main ‘motorway’ around Gran Canaria. It has connections to Gran Canaria airport, Maspalomas, Puerto Rico, all the way to Puerto de Mogan in the west. This completes the 1 day Gran Canaria road trip!

Other Posts You May Enjoy

8 Things To Do In Playa Taurito | A Guide To Taurito, Gran Canaria

Inspired by this Gran Canaria road trip? Pin it for later!